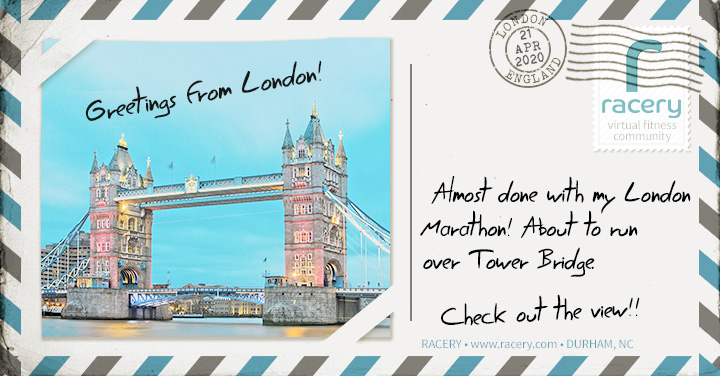 Trutela Insurance, based in San Antonio, Texas, has been running a virtual race in London since early April.

One hundred percent of the company’s staff has entered the event, says marketing coordinator Shari O’Brien. “We take our rooftop garage 1/4 – 1/2 mile walks as a group during the work day regularly (social distancing as we must.) I think it is building camaraderie within our small company.”

The race is a virtual marathon, visiting 26.2 miles of landmarks throughout London like Big Ben, the London Eye and London Bridge. Trutela is donating $26 to San Antonio Food Bank for each staffer who finishes the race.

Trutela’s boss, Joseph Gutierrez, found Racery on Google. Gutierrez “is definitely competing and competitive!” says O’Brien. “And yes, some of us like competing with him, but he works hard to stay in first place.”

“Having the menu where cooking/dancing/yard work/etc. converts to miles has helped kick start even the busiest of us. And what a variety y’all have included in that menu,” says O’Brien. “I don’t think our team as a whole would be so enthusiastic if there were not the multiple exercise options so we were glad to have it.”

“We have a few ‘serious runners’ and some ‘not as serious,’ and everything in between” says O’Brien. “The way your program is set up includes everyone, which has worked to a great advantage for us.”