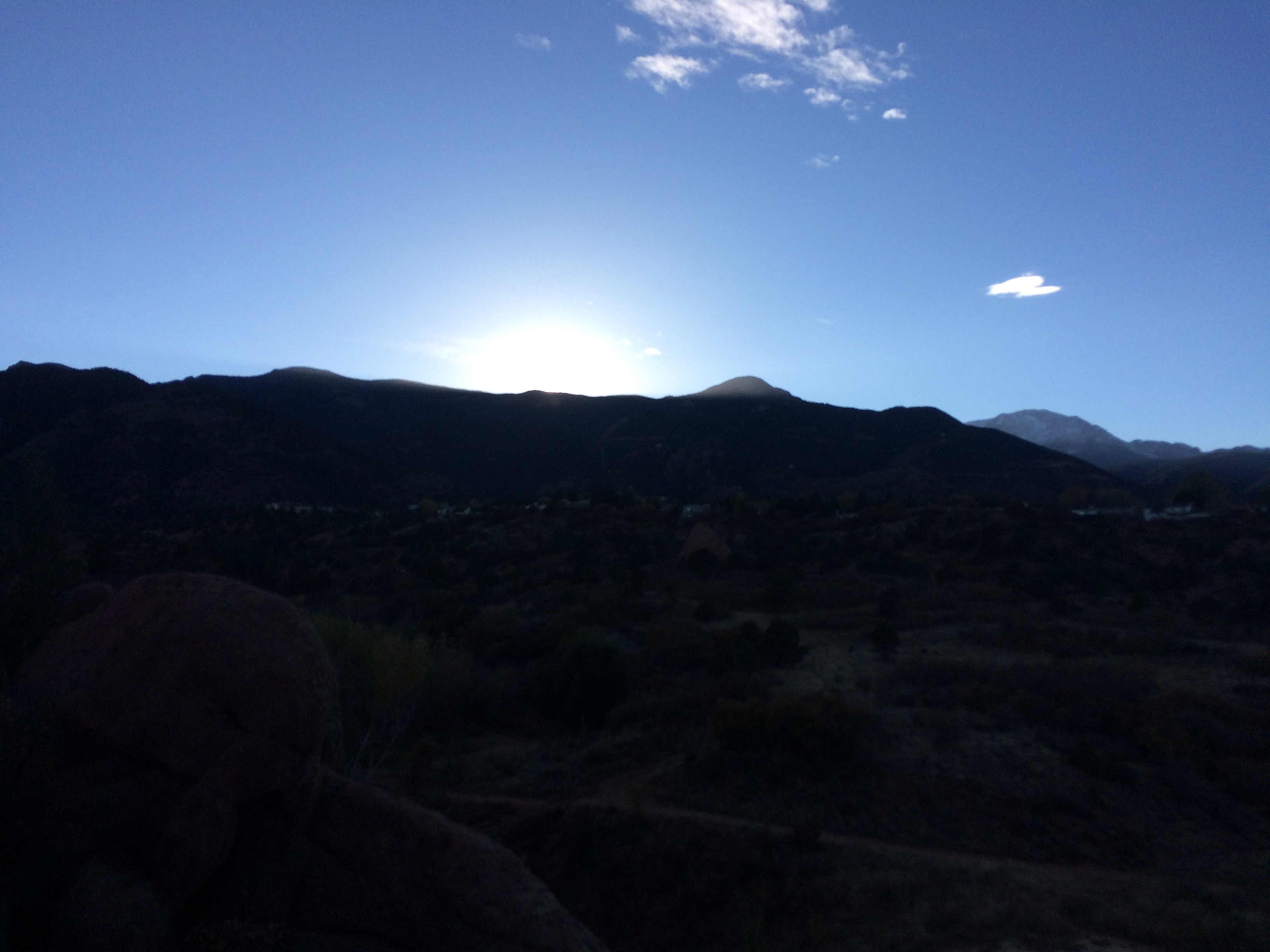 This morning I woke up off-kilter — more than fuzzy-headed, less than full-on depressed, definitely sour.

I shuffled around the dim house. Rather than focusing on the day ahead, I gnawed on yesterday. Itching a grievance. Trying to unforget something — what?! Leaning against a locked door.

Even when I’ve had a solid night’s sleep, many mornings start wobbly and introspective. Sleep faces backward and inward — researchers think that dreams serve to digest the prior day’s experiences. Even after an hour awake, I still have one foot aboard sleep, a dark ship that’s cognitively and viscerally unmoored from the daylit world.

After slouching around the house this morning, I scraped together the willpower to put on shorts, shirt and shoes. I snuck outside and ran. I ran and looked at the path ahead and up into the forest’s arching canopy. I watched the sun rise, listened to dew-drunk crickets and smelled peppery new-cut grass. Not too far along, I looked up from my woolly introspection and gazed forward into the day.

Suddenly, looking forward and moving forward were not just metaphors for optimism, they were its embodiment. Stride by stride, minute by minute, I engaged with what was ahead rather than behind. A puddle coming in six feet, a fallen tree in 300 feet, a hill in four miles. A curve in two minutes, a promise to keep this afternoon, a deadline in three weeks.

While most people would credit this upshift to endorphins, I’ve learned that running is far more than a dose of feel-good juice — running rewires my mind and body.

When I was younger, my moods were like the weather, coming and going on the back of some invisible wind. Left alone, my neurons could curl inward like the roots of a plant stuck too long in a small pot. To navigate away from a gloomy drift, I subconsciously angled into  adventures —  distant destinations,looming deadlines, clashing wills, or beautiful challenges — that kept me facing outward, engaged with the world.

As I’ve gotten older — I’m 53 — I’ve become more conscious of the heft and durability of my blues, and also more aware of their negative impact on others. I’ve also recognized that the adventures I’ve often launched to escape rumination can themselves, ironically, sometimes become obsessions that wall out life’s richness.

I’ve realized that although a dose or three of coffee can get me tingling in the morning, running is the only medicine that fully reconnects me with life. Over-diagnosing the blues can be counter-productive, even self-fulfilling. Often I just need to run.

On this morning’s run, my vision slid through a vast corridor of shapes, alternately hidden and revealed, dark and bright, blurred and sharp. A green wall became a stand of trees. A tree fragmented into a bundle of branches. A branch shattered into shivering leaves. A leaf shredded into a forest of edges.

A 300-foot-tall oak bobbed ahead, then leaned over my shoulder and disappeared into the past. A hill rose, then was forgotten on the downslope. No longer pinned in a whirlpool, time became a river.

Some days, my run achieves little more than sweat and puffing. But even on mediocre runs, I relearn life-lessons: When in doubt, run. The first step is hardest. Try new trails. Look up. Everything passes. Pick a goal and, when it’s closer, pick another. Relax your shoulders. Grinds bring glides. Embrace the burn. Say hello. Enjoy breathing.

But on most days when the running is good, it is very good, a jailbreak from my own skull. A jammed door swings open. A shapeless problem reveals an edge. An antagonist bares a bruised heart. A chore becomes a challenge. A new piece solves a scattered puzzle.

As I run, my heart, lungs and legs calibrate with each other, and against the dirt and wind and angling sun. My strides click off seconds and feet. No longer tractionless, my mind and body become two gears turning the immense flywheels of time and matter.

Striding and free, I chase the day’s unfurling path, escaping into a vast and glorious world.

Oxygen-deprivation undoubtedly colors some of these subjective thoughts, most of which materialized on long runs in recent weeks. On the other hand, there’s lots of evidence, both scientific and anecdotal, that running/walking in nature does lead away from depression, anxiety and rumination towards synchronization, happiness and creativity.

[Henry Copeland is Racery‘s founder and blogger-in-chief. He’s been a running since high school, but only came to really appreciate running’s power to rewire mind and body in the last year. This post owes a lot to insights from Leon, Audrey and Zsofi. Racery powers virtual races. Go here to sign up for a race or here to create your own race.]