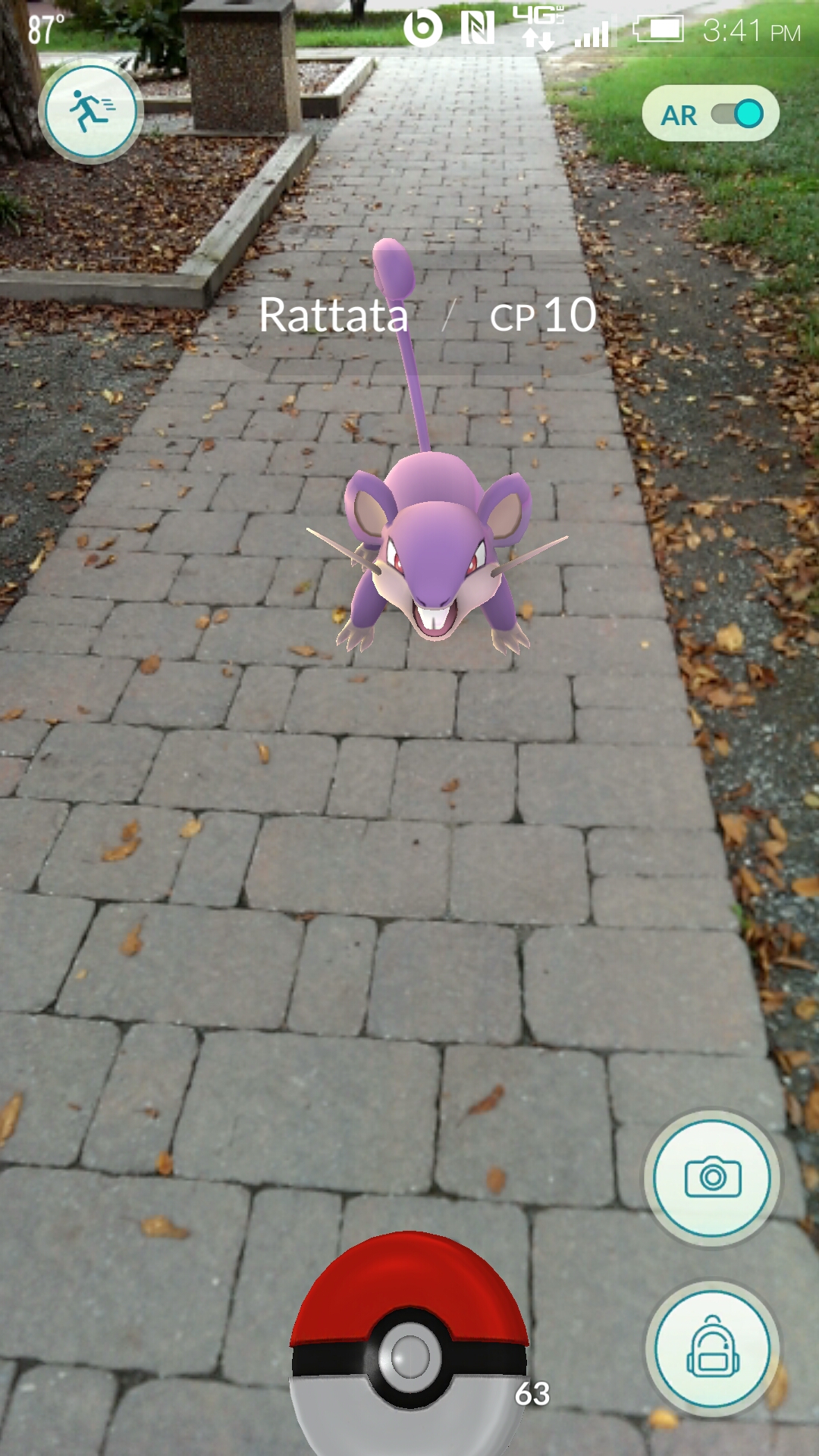 Lots of scribblers are busy writing ‘what Pokemon means’ stories from various angles. I’ll bet there’s already a Medium article titled “what Pokemon Go can teach Democrats about Donald Trump.” Google News shows 3.58 million articles about Pokemon Go. On 42nd street in New York, the editorial board of The New York Times is conniving to squeeze a Pokemon Go metaphor into tomorrow’s top editorial. Going meta, one person listed 17 takes on Pokemon Go that haven’t yet been written.

First, Pokemon Go is a blip. It will vanish in weeks.

Yes, your read right, that’s a raging paradox. But bear with me.

Let’s start with the first claim. Sure Pokemon Go has weeks of growth and hype ahead of it. But in relation to some coming pinnacle of hugeness, the augmented reality game will be 99.99% smaller in a year. People will be saying “what got into us?” or “Pokemon, hell, I was never foolish enough to fall for that.”

Here’s why. Nearly everyone has better things to do with their lives than chase cute and/or vicious cartoons around parking lots. More broadly, most of us are not gamers. We outsource our impulses to game, fight and keep score to groups like the NFL, WWE and GOP.

Pokemon Go’s novelty will wear off, and the buzz will move from ‘have you’ to ‘did you’ to ‘what?’

But just because everyone is doing “it” doesn’t mean it’s gonna last. (To stay with that graph, Pokemon Go will soon prove to be Trump, not Jesus.)

For historical precedents, pause to consider the glorious and brief blips of Farmville, Call Me Maybe, Fifty Shades of Grey, and the Ice Bucket Challenge, as viewed through this graph of Google searches. 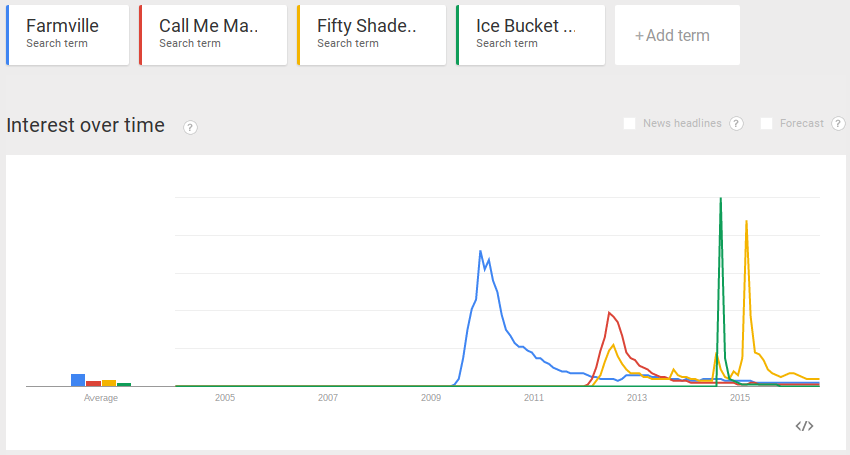 Pokemon Go is this summer’s Pet Rock or I Got You Babe… fascinating froth, not a fundamental trend or embodiment of a communal vision. Unlike games and traditions that are deeply woven into a culture — Americans might refer to Pro Football in this decade or Thanksgiving in this century,  the French can fall back on the Tour de France or Michelin stars —  Pokemon Go is an earthquake.

As an earthquake, it’s giant and unavoidable for a few minutes. But soon enough, the event is barely noticeable when viewed on the seismograph of history.

Which brings me to that second, diametrically opposed claim I presented earlier — that this chapter of our 150-year electronic era will be titled Pokemon Go.

Earthquakes last a few minutes, then vanish into the hills. But they rip down walls that have stood for decades. Afterwards it takes years to build new domiciles and infrastructure on top of the rubble an earthquake leaves behind. Long after we’ve deleted Pokemon Go from our phones, we’ll be living in the ideascape it’s revealed and unleashed.

Since 1993, we’ve been living blithely on the fault line between two tectonic plates — on one side the world of stone, flesh and neurons and, on the other, the world of pixels, digits and algorithms.

In the nearly quarter century since the Internet was conceived at CERN, our psychic and physical realities — both personal and social — have been migrating into our screens and machines, one tectonic plate subsuming the other. Most relationships in the US are now initiated in our machines. Many end in our machines. Fantasy football consumes more hours than “real” football. We all know people who live and die by how many likes their Instagrams get. People sleep closer to their phones than their spouses. Trivial Facebook flirtations cascade into soul-plumbing journeys. Far more cyclists invest emotion, sweat and hours in virtual races rather than in physical races.  Redditors inhabit thousands of niche communities, many of them bigger and more vibrant than most ‘real’ communities. Clout has been subsumed by digital variants of Klout.

The wiring of our minds is now hooked up to this giant fibrous machine we call the Internet… our dopamine pumps controlled by impulses coming through its fibers and switches. We think we control our machines, but they’re actually playing our emotions like pianos, eliciting crescendos of attention and action. Giga-entrepreneur Elon Musk argues we’re all just avatars in some giant video game.

In the more theoretical discourse of academia, the computer and the brain have already become a mobius strip, with no clear line delimiting where one stops and the other starts. Just as we’re rushing to create computers that can ‘think’ like humans, the computer has become the mirror that scientists hold up when trying to understand our minds.

If you think I’m exaggerating, check out this chunk of an article in yesterday’s NYTimes reporting on the proceedings at a recent symposium at The New York Academy of Sciences:

…consciousness is a kind of con game the brain plays with itself. The brain is a computer that evolved to simulate the outside world. Among its internal models is a simulation of itself — a crude approximation of its own neurological processes. The result is an illusion. Instead of neurons and synapses, we sense a ghostly presence — a self — inside the head. But it’s all just data processing. “The machine mistakenly thinks it has magic inside it,” Dr. Graziano said. And it calls the magic consciousness.

Got that? Your mind is a machine that pretends it’s got consciousness. And your machine (say, for example, your car) may soon imagine its got a conscious so it can decide who to spare in an accident.

Which brings us back to the fault line between virtual and real. In retrospect, Farmville was a warning tremor showing how deeply invested people can become in their non-physical realities. But Farmville didn’t breach the wall between physical and virtual. And unlike Pokemon Go’s giant public parade of monster hunters, Farmville was played out in the privacy of individual’s homes and work desks and never created a physical spectacle for everyone to gawk at.

If you think spectacle is too grand a term, check out this video:

The Pokemon Go earthquake has gone a long way to erasing our illusions about an impenetrable wall between our virtual and physical worlds. This is why so many people are wandering dazed in the streets. This is what’s really happening as we walk along staring into palm-sized virtual worlds that suddenly feel more tangible than the world we’ve grown up touching and trudging in.

This particular earthquake will be over soon. 99.99% of us will delete Pokemon Go from our phones. Luddites will chortle and pretend nothing changed. But many of us will remember for the rest of our lives the hot and humid days in July of 2016 when the walls between our virtual lives and the physical world vanished.

What does all this big picture speculation about historical eras mean for Racery and our virtual races?

We’re obviously happy to be laboring in the growing space between atoms and pixels. Having seen the magnitude of emotion unleashed by virtual communities like the Hogwarts Running Club when they join a virtual race, we’re not surprised by the Pokemon Go explosion.

We’re thrilled to be building positive new virtual dimensions for people to inhabit — beyond the up, down and side ways of 3D ‘real’ space — building places like ‘top fundraiser’ or ‘most streak days.’  We’re thrilled to let anyone in a gym row through the canals of Venice or use loops around a retirement home cafeteria to walk the Appalachian trail.

No matter how short the Pokemon Go moment, I think its implications for Racery are good. Ad visionary David Berkowitz wraps up his Ad Age analysis of Pokemon’s implications for marketers by observing: “Soon, you’ll be spending so much effort running out to the virtual gym that you can cancel your membership to the real one.”