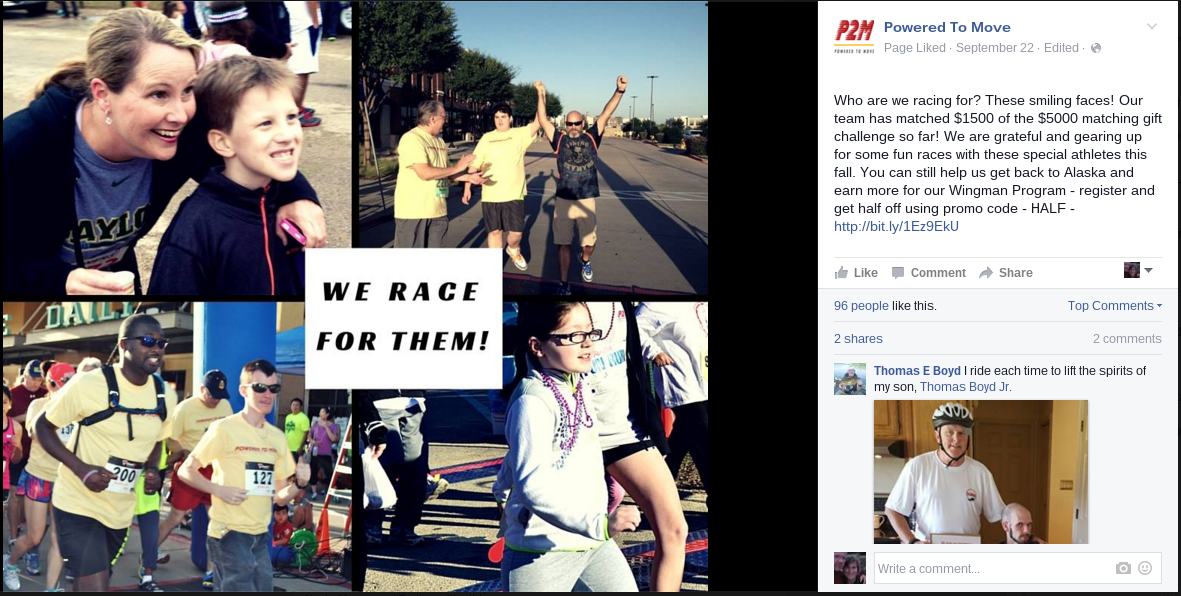 In the summer of 1985, Mike King spent four months pushing his wheelchair from Fairbanks, Alaska to Washington, D.C. This summer, 136 people commemorated that trek by pooling their exercise miles to race the same distance in two weeks on a virtual route hosted by Racery.

The commemorative race raised more than $24,000 for Powered to Move, a Texas-based charity Mike King founded in 2013 to promote athletic accessibility.

“That’s a really good return for a first year event,” says Sharyn King, the charity’s co-founder. The donations to the 501c3 came in the form of registration fees and sponsorships.

Mike King was paralyzed from the waist down in a motorcycle accident in 1978. Deeply depressed, he slowly realized that exercise was key to regaining control of his emotions and life. The 1985 trek was a kind of pilgrimage to health. Since that time, King has participated in multiple elite competitions, including the Boston Marathon, the Pan American Games and World Games.

Competing is just part of what keeps Mike King busy. He has also worked to help other disabled athletes achieve their goals, most recently through Powered to Move.

While this summer’s fundraising Anchorage to DC race was supposed to cover 5605.8 miles, which would have replicated Mike King’s original journey to the decimal place, participants got excited and covered the distance much faster than expected. The goal was doubled and participants ended up covering 10,695.6 miles in 30 days. 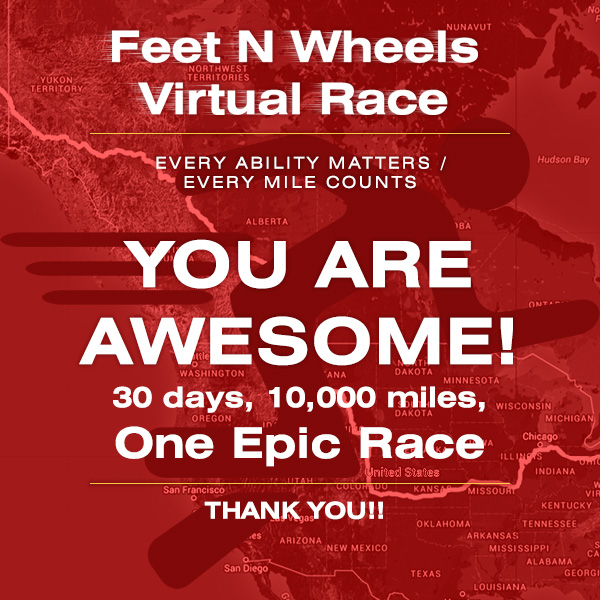 Powered to Move supporters across the country logged miles by replying to a daily Racery e-mail or using web form to upload their personal mileage. Unlike most charity races, which are organized on a single day for a single sport, Powered to Move’s Racery race counted any miles — whether walked, run, cycled, swum, or, of course, covered in a wheelchair.

Though all miles logged were added together into one team total, participants were still very aware of their standings in the leaderboard of individually logged miles, says Sharyn King.

Here’s a video Powered to Move created to sum up the virtual charity race experience.

“We were concerned with doing a 30-day campaign that we would start losing interest after two weeks. And that didn’t happen, people were really engaged to the end. That was a really nice thing for us,” says Sharyn King.

In fact, King says that racing for a full month had many benefits. A single day physical race would, at best, create a single burst of social media postings about mileage and accomplishments.

“The thing that really engaged people was that they could log miles, go to the map and see how everyone else was doing and see the team,” says King. “We had some people going back and forth on Facebook saying, ‘Hey, I just passed you.’ I was surprised how many people were commenting on the map and then going on Facebook and commenting too.”

Sharyn King had a 30-day plan to drive awareness of the race before launch, engaging with key supporters who shared news of the upcoming race with their own supporters via Facebook. Powered to Move’s Facebook following grew by 4% over the course of the race and over 607 comments were submitted as racers posted miles to the Racery map.

A physical race requires logistics and outlays for police and porta potties and insurance and then… sometimes… gets rained out. And whether it rains or not, a conventional race engages mostly with stakeholders living within driving distance. In contrast, King notes that “Racery’s virtual route let us interact with people close to us and far away in a fun way that keeps them engaged.”

Sharyn King says Powered to Move originally planned to do another in the fall of 2016, but having seen how smoothly this race went, she’s now thinking about another race in January 2016.

“We did very well financially. I’m a big cheerleader of Racery,” says King.

[Want to stage your own virtual charity event? Using one of our races on a custom route can serve as an exciting month-long event to drive public awareness, content for social media, and p2p fundraising. Write sponsorship /at/ racery.com if you’re interested in working with us.]