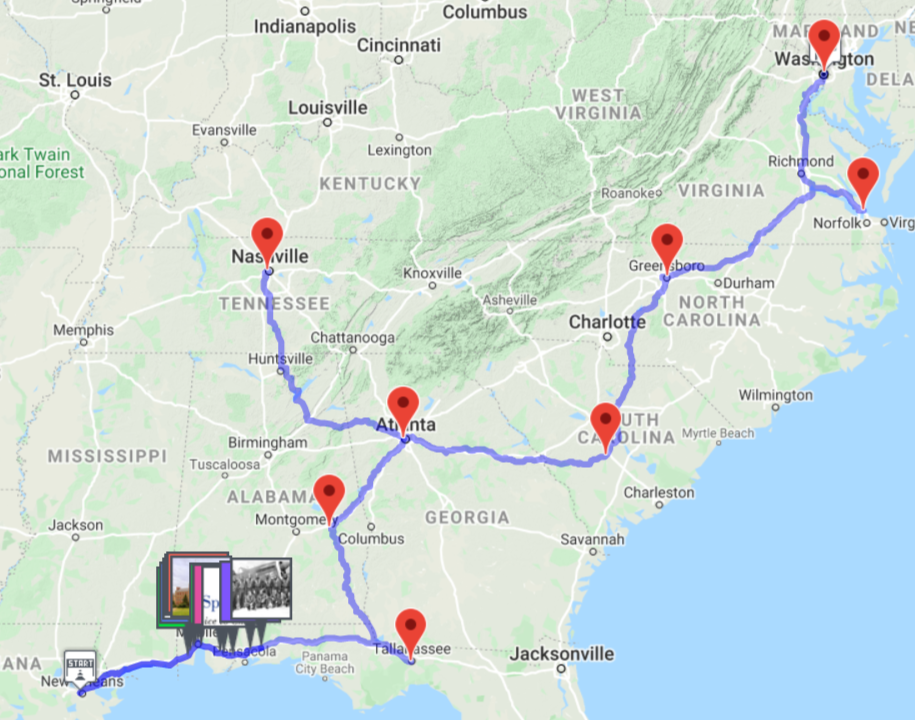 Virtual races only become real when enough racers believe in the race. Otherwise, virtual races are just “glorified time trials,” as Martin Fitz Huber put it in Outside Online.

1) Custom route for a virtual race

Racers love to compete on a route that connects with their own lives.

Though some races include only individual avatars, adding teams brings an extra layer of competition and socializing.

While not essential, virtual postcards can add an extra dose of realism (and social sharing) to a virtual race. For example, when each Zillow team arrived at an HBCU on its race’s 2020 mile route, the team received a customized e-postcard featuring the corresponding college or university.

Racers love Racery’s digital bling. The race bibs—complete with virtual wrinkles and safety pin holes—and finish awards get shared on social media and printed to display on the fridge or bulletin board.

With each new exercise log, the racer gets a 360° Google Street View of the racer (or team’s) position on the route.

Some race sponsors choose to only serve runners. That’s fine. But why should runners have all the fun?

More participants means more fun for everyone, and some race sponsors decide that anyone who exercises should be welcome in the virtual race. In Racery’s activity conversion races, each participants’s time spent exercising gets converted into miles on the route based on Racery’s proprietary conversions.

To level the playing field and make sure everyone has fun, conversions are based on effort. As a result, a swimmer or tennis player’s hour of effort generates roughly the same route miles a cyclist’s.

Think of a Racery activity feed as a healthy Facebook, constantly updating as racers’ newest exercise logs appear at the top of the feed. Scrolling the feed lets participants quickly keep up with what their peers are doing and, in a fundraising race, donations.

Some racers enjoy uploading extra content with their logs—photos, comments, hashtags linking to similar activity logs, and location data. Racers can also “@” each other in comments or the race message board.

Even the most dedicated athletes need encouragement. Racery gives racers lots of encouragement along the way, including commendations for streaks and a daily exercise nudge that includes complete race standings at that moment.